A lack of access to clean drinking water is a significant health and quality of life issue for many First Nation communities across Canada. On June 20, 2018, Indigenous Services Canada listed 78 First Nations that have long-term drinking water advisories in effect. The Indigenous people of Pikangikum, a remote fly-in Ojibwe community in northern Ontario, know what it’s like not to be able to drink water directly from the tap – they have been under a boil water advisory for more than a decade. Not only that, just 109 of the 500 homes in Pikangikum even have a tap – the rest must travel to one of six watering points in the community to collect water in buckets for drinking or cooking. The elders of the band identified finding, and implementing, a solution to providing access to clean drinking water in homes as a top priority for their community.

They tasked this problem to the Pikangikum Working Group (PWG), a volunteer-run group of Indigenous and non-Indigenous people who have offered their professional experience to identify actionable solutions to some of the major issues facing this First Nation community. Tasked with bringing clean drinking water to 10 more homes in the second phase of the project, the group reached out to Habitat for Humanity Manitoba.

“I met with the nurses [in Pikangikum] and learned about the serious consequences of a lack of water,” says Bob White, founder and chair of the PWG. “Skin infection is common in Pikangikum and the cure to eliminate the disease is always the same – showering regularly. In 100 per cent of the reported cases the disease continues because the patient does not have access to the water needed to shower. This is especially common in the spring months.”

The solution is bathing, but bathing is not an option when you have to carry water from a watering point home in a bucket.

In the first year of the project, PWG worked with partners to retrofit 10 homes and provided those families with clean running water. In the second year, PWG was looking for a new partner to help them retrofit a further 10 homes.

“When I met with Habitat about Pikangikum, I saw the heart, the recognition, the realization,” says Bob. “I saw that Habitat understood.”

Habitat Manitoba agreed to partner and became the project manager/prime contractor for phase 2 of the project while other partners, the Anglican Church of Canada’s Primate’s World Relief and Development Fund (PWRDF) the Mennonite Central Committee Ontario and Atlas Copco Mining Rock Excavation Technique Canada, raised the funds to pay for the work. PWDRF, who also helped implement the project, raised more than $500,000 towards phase 1 and 2. They were also instrumental in helping raise awareness around the importance of safe water and sanitation for Pikangikum and other Indigenous communities in Canada.

Having learned from phase 1 that bigger water tanks were needed, Habitat’s first job was to develop designs to install 1,200 gallon tanks in the homes. Developing the budget was a challenge. The larger tanks cost more, and all of the phase 2 homes were in disrepair and needed work before being retrofitted.

“The larger tanks wouldn’t fit underneath the homes so we had to design and build two sheds to house the fresh water tank and the sewage tank,” says Steve Krahn, Vice President of Regional Development at Habitat for Humanity Manitoba.

The threat of electrical blackouts was also a major consideration. Since Pikangikum is not connected to the Ontario power grid, its power is almost always at capacity; the community's generators often fail during the winter and outages can last two or three days.

“When we built the sheds, it was important to put measures in place to mitigate freezing during a blackout,” says Steve. “There are heaters inside the sheds and the sheds themselves are insulated. When the power goes out, the insulation should keep the tanks from freezing until power is restored.”

Pikangikum was also concerned that the electricity draw from the 10 new pressure pumps would put the community over capacity and lead to more blackouts. The solution was a community-wide project to change all light bulbs to higher-efficiency LEDs.

The homes that received indoor plumbing were some of the most vulnerable homes in Pikangikum. Many are overcrowded due to the severe housing shortage that exists in the community, others house elders and people with significant disabilities.

“It’s meant a lot to the community,” says Raymond Suggashie, economic development project officer for the Pikangikum First Nation. “We’re getting calls from others on dialysis and elders (to be part of the next phase),” he says.

“Habitat does more than build homes,” says Jay Thakar, manager of the Indigenous Housing Partnership at Habitat for Humanity Canada. "One of the things I’m most proud of is how we are enhancing the capacity of Indigenous youth and women. This partnership is creating jobs and it’s sustainable.”

Sometimes, when a community faces numerous challenges, it’s hard to motivate the younger generations to want to make it better.

“There is a need for more skilled tradespeople within Pikangikum and outsourcing takes money out of the community,” says Steve. “We wanted this project to be sustainable and to increase the capacity of the community to take on indoor plumbing projects of its own.”

In order to do that, Habitat Manitoba, the PWG, and PWRDF worked closely with the band council and the community to identify young people to be trained to work on the homes. Five youth (two women and three men), who were selected by the chief and council, shadowed professional trades people and were trained on carpentry, plumbing, and electrical skills.

The youth gained more than just job and employment skills; they’ve been provided with the tools and experience to help improve their own community by continuing the work and retrofitting more homes for clean running water.

“It’s tough to find work around the community,” Raymond says. “Now (the young people) have skills, and they are eager to work.”

Will Postma, executive director at PWDRF, said that the time spent by Habitat Manitoba with youth trainees in Pikangikum was an additional benefit in phase 2 of the project. “Training is an investment for the community,” Postma said. “And for the continued effective running of the installed water and sanitation infrastructure.”

The success of the Habitat/PWG/PWRDF partnership has also caught the attention of the federal and provincial governments, which have recently provided enough funding for the community to retrofit another fifteen homes. The major difference in this phase is that the community will do this on its own, with the youth trained in phase 2 hired to be responsible for implementing the project to bring clean running water to more homes in Pikangikum.

While this is a major step forward, there are still many more in the community without access to clean running water in their homes.

Now that youth within the community have been empowered with the skills to make it happen, the hope is that they will continue to move forward so more homes will have access to clean, safe, and reliable running water.

Habitat for Humanity in Canada brings communities together to provide families with an opportunity to build the foundation for a better, healthier life through affordable homeownership. Homeownership provides Indigenous families with the stability they need to succeed and, in turn, to strengthen their communities.

While Canada is continually ranked as one of the top countries in the world for its standard of living, for many Indigenous people, Canada is a very different place. Poor and substandard housing conditions are a persistent problem among Indigenous peoples.

In addition to helping improve living conditions, Habitat’s affordable homeownership program supports capacity development, sustainability, and empowerment. Partnerships with Indigenous communities, which often include hands-on building experience for community members, help them strengthen their housing management abilities, and build their internal capacity to introduce affordable homeownership as a long-term solution to some of their housing needs. 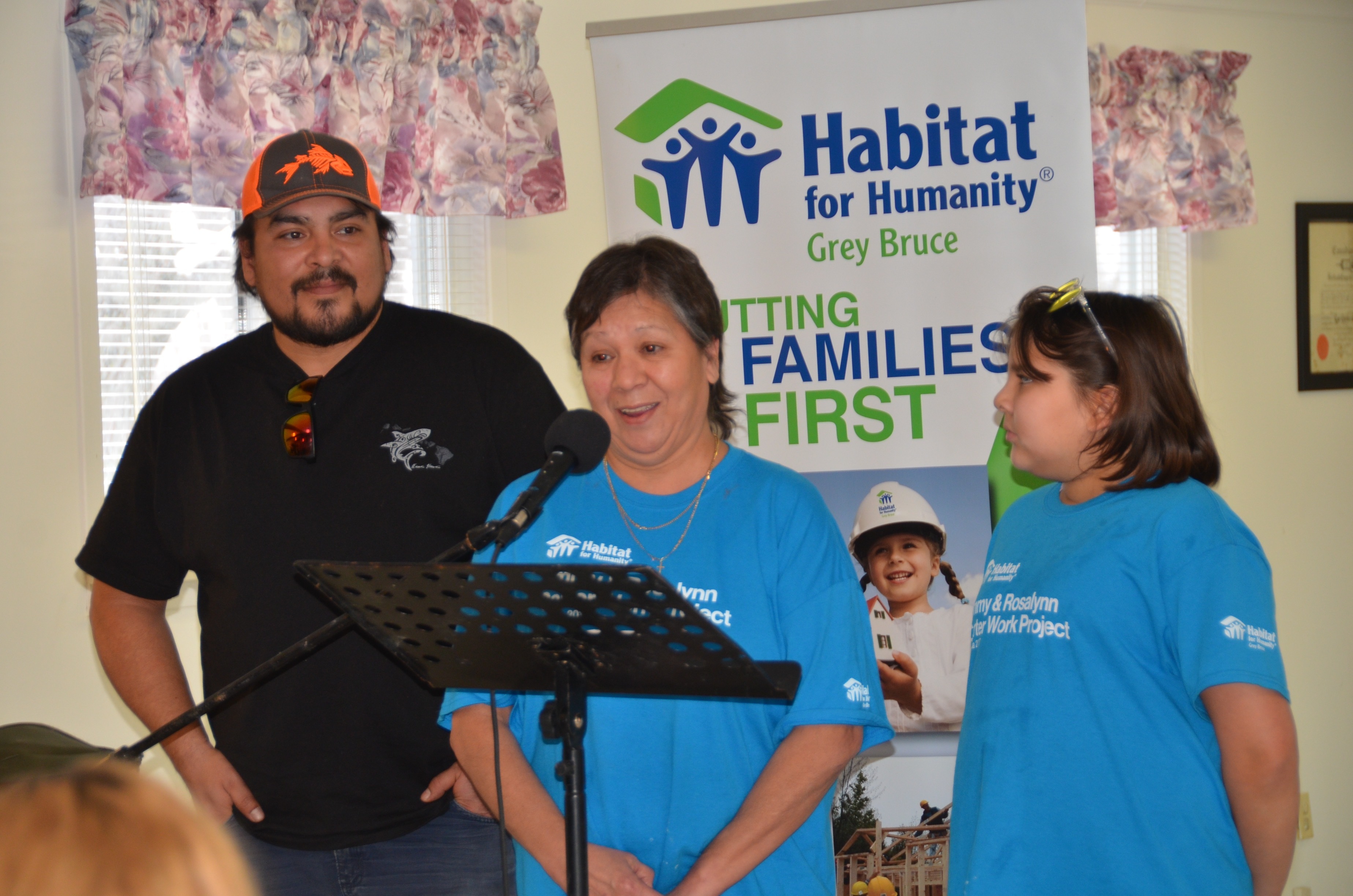