On May 14, Habitat for Humanity Canada held its virtual annual general meeting, which included celebrating the achievements of local Habitats during its national award announcements. Ten local Habitats were recognized for their 2020 efforts and accomplishments. Congratulations to all the winners! Read more to find out who won.

The Kenneth J. Meinert Leadership Award was developed to honour individuals who, through exceptional leadership, have significantly advanced the mission of Habitat for Humanity in Canada. This award has been developed to pay tribute to the contributions of Ken Meinert and to articulate and reward those leadership traits that personify the very best of Habitat’s values and culture. The winner of this award may also designate a $10,000 grant to their chosen area of Habitat’s work. The grant is donated by BAILEY Metal Products in honour of Ken’s retirement from the company.

The winner of this year’s Kenneth J. Meinert Leadership Award is Mary Margaret Parent. Mary Margaret possesses knowledge, compassion and an eagerness to serve others that is unparalleled.

Mary Margaret is currently serving as the Past Chair of the Board of Directors. When the pandemic hit, she immediately joined local outreach operations ensuring volunteers and homeowners had what they needed to sustain themselves through the lockdown. Mary Margaret provided constant check-ins and notes of encouragement as well as strong guidance and leadership to the Board and the CEO through these most difficult times. In addition to her local Habitat commitments, Mary Margaret has shown unwavering dedication to ensuring families around the world have access to safe, secure and affordable housing. She has passionately participated in global initiatives in Kyrgyzstan, New Orleans (post-Katrina), Ghana, and Haiti (post-earthquake). She has also participated in Habitat Canada builds in Iqaluit, Tobique First Nations and British Columbia. Mary Margaret is the epitome of leadership and the results of her volunteerism are immeasurable. Congratulations to Mary Margaret on her well-deserved win.

Mary Margaret Parent was featured on CBC Windsor’s Afternoon Drive following her win. You can listen to her interview here.

The One Habitat award is the integration of all we do – communications, operations, governance – with the goal of serving more families in our country and around the world. The winner of the One Habitat award lives and breathes this spirit by embodying the idea of ‘one world, one Habitat’.

In 2020, this year’s winner not only persevered but strengthened their programs and services to families, improved their organizational capacity and continued to build within their local community. Congratulations to Habitat for Humanity Greater Ottawa for winning the One Habitat award! Habitat Greater Ottawa completed their largest community development build to date of 16 townhomes, broke ground on an 8-unit stacked townhome, introduced a new prefabricated construction method to improve and speed up build timelines impacted by COVID delays by 25 percent, launched an Online Build Catalogue, and initiated a new Deferred Homeownership Model and Blended Mortgage Model to serve more families. In addition, they hosted their first-ever virtual gala, are working to partner with their city’s largest social housing provider and continued connecting with Global Village team leaders and participants to engage them in local build projects. And if that isn’t enough, they partnered with another local Habitat that will see 15 new units of safe, affordable housing built by 2023.

Habitat for Humanity GTA won for their new approach to deliver affordable units for Habitat homeowners: Partnerships with private residential developers, known as the Developer Partnership Initiative. Through this innovative initiative, 34 families took possession of their Habitat homes in 2020, with 212 units scheduled to be delivered through developer partnerships by 2024.

Habitat for Humanity Mid-Vancouver Island has a long history of working with the building industry to increase the energy efficiency of new homes. They began construction on a modern 6-unit multiplex to support six families instead of two on a similar-sized lot, allowing them to triple the number of families served. Through best practices they are confidently building more sustainably, and graciously accepted the Best Builder Award in Nanaimo for 2020.

The Optimal Performance award recognizes two local Habitats who are finding new ways to move our mission forward in order to serve more families in ways that can be replicated in other communities.

Habitat for Humanity Greater Ottawa implemented major changes to adapt to the landscape of 2020. They quickly and effectively incorporated technology into their day-to-day operations, procedures and programs, such as hosting their first ever virtual gala with over 492 attendees from 48 cities in 5 countries, partnering with Shopify to launch restoregoshop.ca, developing an Online Build Catalogue as a more tangible way for supporters to fund our upcoming builds, and executing two successful Direct Mail online campaigns where donations doubled from the previous year.

Habitat for Humanity Heartland Ontario optimized their organizational capacity and resources in 2020. This helped them to significantly improve their ReStore shopping experience for in-person shoppers and develop an online shopping experience at all seven of their ReStores. Additionally, they developed an amazing charitable partnership with Northern Commerce in 2020, which included a donation of $150,000 worth of digital services to help empower families in their community.

The Mobilized Leadership award recognizes two local Habitats who went above and beyond to foster a culture of leadership, inspiring leaders at every level of their organization with a goal of achieving our mission and vision.

Habitat for Humanity Waterloo Region put a new strategic plan into action and shifted to a ‘putting people at the centre’ approach during the pandemic. This included achieving important milestones such as the board attending Capacity Canada's Governance Bootcamp, receiving Advanced Board Governance training and establishing a Board Diversity Committee to revamp the recruiting process ensuring fair practices, as well as boosting organizational learning of Diversity, Equity and Inclusion.

Habitat for Humanity Newfoundland Labrador made significant strides to adapt to the pandemic within their organization. They introduced online sales in the ReStore, recruited three new board members in 2020 and updated their board package, lifting their organization to new heights in terms of updated processes and expertise. Significantly, as their ReStore volunteer numbers diminished in 2020, they partnered with various local groups such as the Association of New Canadians, The Murphy Centre, Community Sector Council, Easter Seals and Jobs NL, to arrange wage subsidy programs in their ReStore.

The Epic Engagement award is given to two local Habitats who ignite action and inspire their community to support our mission – all while significantly raising awareness of Habitat for Humanity’s brand and profile.

Habitat for Humanity Saskatchewan used online engagement to increase their online social and retail presence in 2020. They launched an online store, engaging fans on their social pages and growing sales with live store tours on social media twice each week, as well as daily posts of online items for sale. Through their efforts, Habitat Saskatchewan’s monthly revenues grew by 100% during the first seven months of online ReStore operations.

Habitat for Humanity Vancouver Island North created a new way to engage the community and raise money to build homes that was COVID-safe, doable under short notice, and repeatable. Their team developed #BidtoBuild, an online fundraising auction to engage the community to support Habitat. In addition to raising money for their affordable homeownership program, Habitat Vancouver Island North used this event to elevate local businesses, with five Chambers of Commerce and business associations signed on as supporting partners. They exceeded their target of $20,000 net during the first year of this fundraiser by over $6,000!

Habitat for Humanity Camrose implemented a new mortgage model in 2020 that ensures long term sustainability for new builds and buyback programs. With this new model, families pay for their homes with two affordable mortgages: The first provided by a financial institution and the second provided by Habitat Camrose. Each mortgage is 50% of the home’s fair market value. This approach helps to accelerate Habitat Camrose’s cash flow, enabling them to double the number of families served annually.

Habitat for Humanity Victoria created the Community, Family, Home + You campaign to raise funds and awareness for Habitat’s mission and Habitat Victoria’s largest build project in its history – a 10-unit townhome development. As part of the campaign, Habitat Victoria launched a $200K in 100 Days appeal. Between June and September 2020, community members were invited to make a minimum donation of $1,000 towards the project. Within 103 days, they raised over $203K with 155 donors and 1 corporate partner. Amazing!

Congratulations to all our local Habitats for these well-deserved wins!

On May 14, Habitat for Humanity Canada held its virtual annual general meeting, which included celebrating the achievements of local Habitats during its national award announcements.
En savoir plus... 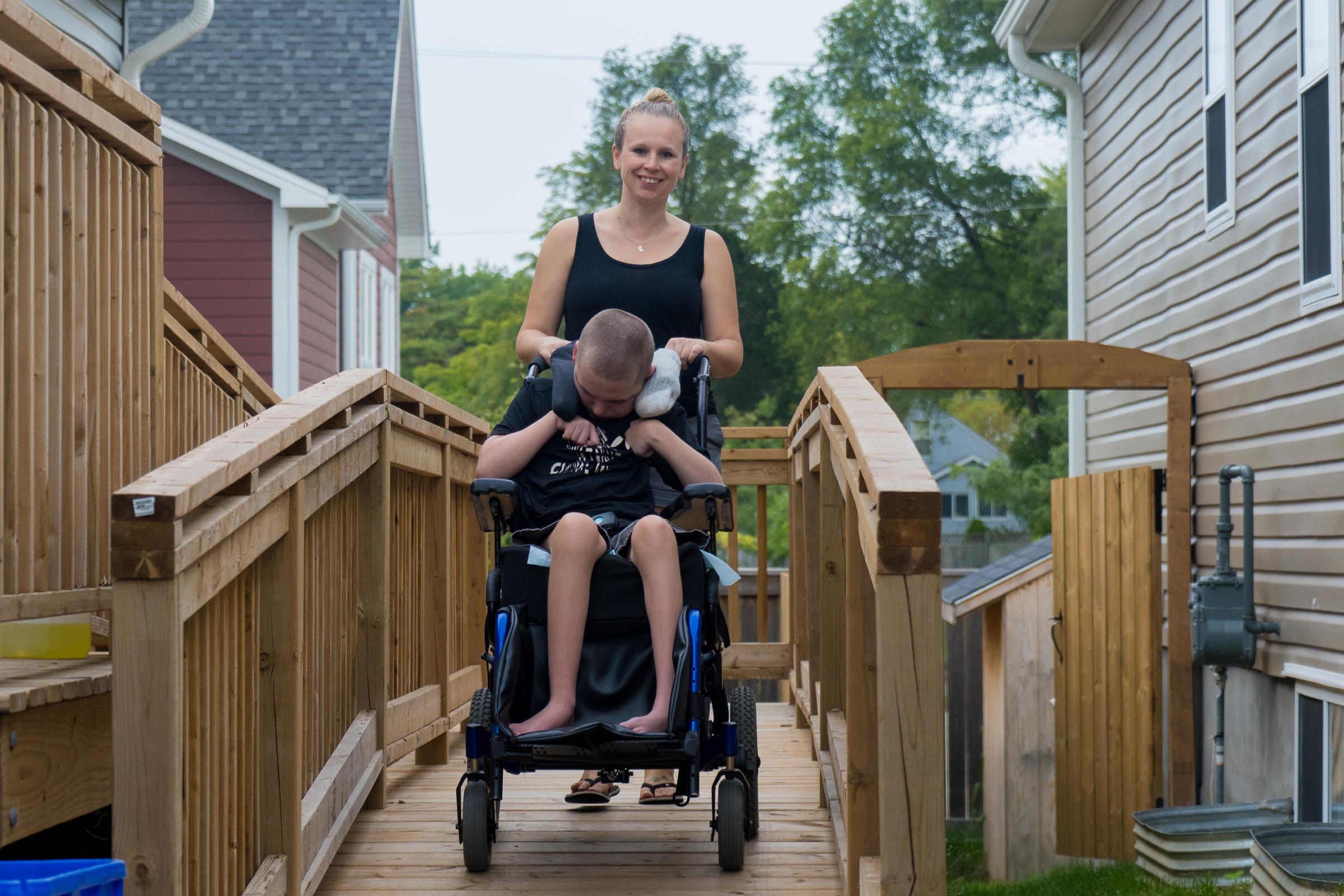